Like any other gamer I to have a massive backlog.  It consists of games that I want to play, or feel like I should play, but just haven’t taken the time to play.  One constant feature of the games in my backlog is they all take a large time commitment.  The Mass Effect and Metal Gear Solid series are a few examples that would take me a month if not more to complete.  One problem that has increased everyone’s backlog is how inexpensive video games have become.  From Playstation Plus to Steam summer sales it is easy to have a huge library of games for very little money.  Looking at trophy data from the Playstation Network most people don’t beat the games they are given for free.  The problem here is people don’t feel as much investment in a game they acquired for free.  On the other hand, pay sixty bucks for a game and you already have a monetary investment.  Even if the game is good but not great I want to get my money’s worth and complete the game.  I own many games through Playstation Plus I have never even started.  If a game doesn’t immediately hook me I usually don’t play more than a hour.  The only reason this doesn’t cripple developers is because all of these games are digital.  If I buy a used game for five bucks and it doesn’t hook me I would return it and the vicious cycle of used video games takes over.  If I pay five bucks for a digital game I can’t return it’s mine forever.  The developers don’t care if I don’t finish a digital game because there is no danger of me returning it.  This being the state of video games purchases my backlog is growing faster than ever.  The upside is if there is ever a large gaming drought I will have plenty of games to pass the time.  Is there any hope of me taking the time to complete the Mass Effect series when I can buy ten new games for a nickel?  Probably not but I can hope. 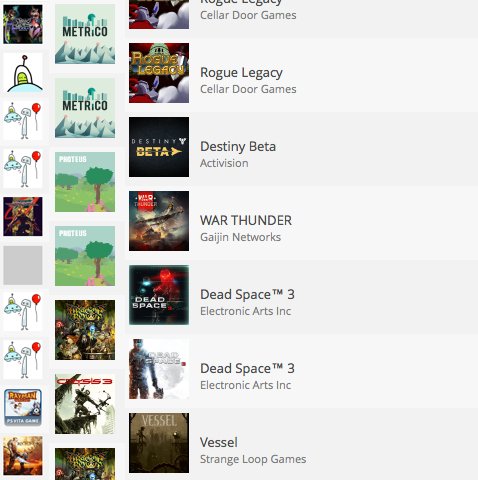 Just a small sample of my backlog.