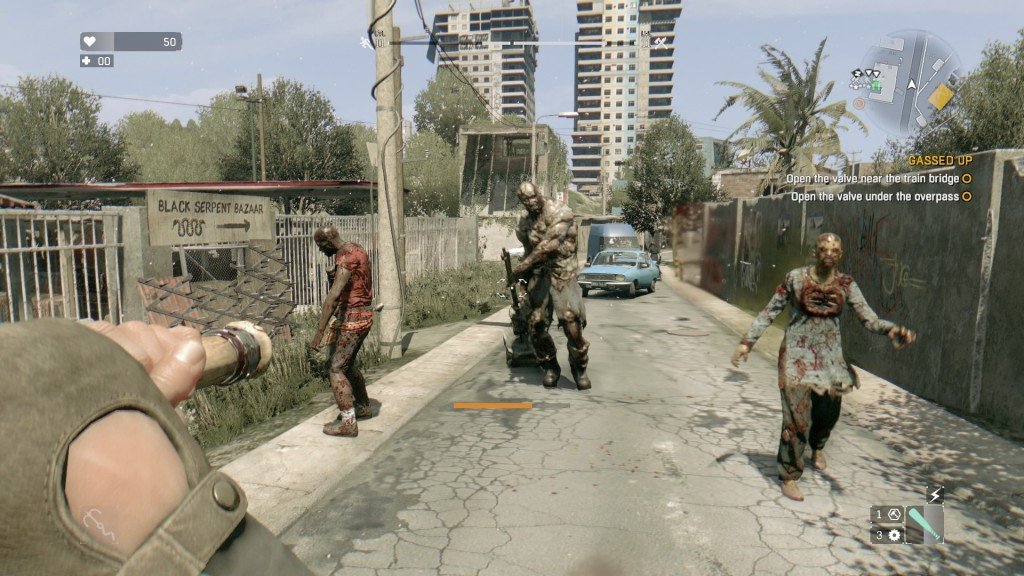 Zombie games fall into two different categories: either the undead masses are simply there to be blown up or the zombies are something to avoided at all costs.  Dying Light from developer Techland is squarely in the latter category.  When the game took the training wheels off me and threw me into the open world; I was at first terrified of the zombies.  This was the case because I assumed the zombies took their ques from the walking dead.  I was sure I would be quickly mobbed by zombies if they saw me.  This I soon learned was an overestimation.  Dying Light’s walkers are some of the most docile zombies I have ever encountered, at least at first…

Dying Light’s elevator pitch is Mirrors Edge + Dead Island.  I am surprised no one has tried this before because it works brilliantly.  Jumping, climbing and sliding your way across the beautifully realized city of Hurran is enough to make Dying Light stand out from the crowd of zombie games.  A dynamic day/night cycle is used, quite effectively I might add, to constantly push the playing adding a layer of tension even when your not being chased by zombies.  When night falls all hell breaks loose.  Special zombies I call “stalkers” spawn all over the game map.  If one of them sees you a mad dash to the nearest safe zone is your only option.  These chases are the highlight of the action.  I highly recommend using headphones the combination of my characters frantic breathing and the sound of the zombies relentless pursuit increased my heart rate considerably.  Dying Light is never scary but the constant sense of tension was enough to keep me on the edge of my seat for the first couple of hours at least.

Crafting is the name of the game in Dying Light.  There are materials everywhere I had tons of fun just searching for them.  Breaking into houses and tearing open cabinets trying to find that last peice of duct tape for my machete made me feel like a real zombie apocalypse survivor.  When you finally make that machete duct taped to a chainsaw the combat is there to make you feel like a badass.  Using a machete to cut a zombie up piece by piece is really satisfying.  Jumping around a group of zombies, vaulting over the scary ones and cracking heads when I need to is some of the best zombie killing fun I’ve had in a while.

Nothing about Dying Light screams next gen.  But in those moments when the zombies aren’t chasing you take a look around.  Too many post apocalyptic games use the brown, black and grey color palette.  Hurran is refreshingly colorful especially during a sunset you might even say it’s pretty.  Everything with Dying Light’s presentation is good not great.  The voice acting is fine even with a few bad jokes here and there.  Most of the characters suffer from dead eye but you spend so little time that it doesn’t matter.  Graphically the only problem is accessional texture pop in but again it doesn’t detract from the overall experience.  My one problem with the presentation is the ambient noise.  This may seem like an odd complaint but bear with me.  When your character makes a loud noise i.e. shooting a gun all the zombies from a large radius start converging on you.  Whenever this happens the zombies let out a chilling scream or at least I thought so.  It turns out those noises are ambient noise.  In fact, much of the action music incorporates zombie screams.  When I figured this out those noises became much less scary and broke the immersion for me.

Dying Light was the right game at the right time.  Is it a great game? No, but it is a very good game and definitely worth your time.