Wind the clocks back to 2007.  Call of Duty was already an industry powerhouse, but with the release of Call of Duty 4: Modern Warfare, the triple-A video game industry changed forever.  Modern Warfare became the gold standard for online FPS multiplayer.  But after nearly a decade of gritty Call of Duty-like shooters Overwatch is a breath of fresh air not only for gamers but the industry at large.

Blizzard is nothing if not one of the most intelligent developers in the industry. It was impossible to miss the marketing barrage Blizzard unleashed leading up to Overwatch.  Everything from the animated shorts to the giant tracer statue in downtown Hollywood and the lengthy beta had one goal: make everyone fall in love with the characters before the game comes out.  It worked.  I had never seen so much chatter about video game characters for a game that wasn’t even out yet.  The massive amounts of fan art, cosplay and yes even the NSFW stuff fed the fire that was Overwatch hype.  It’s the heroes and the personality of Overwatch that drew me in and I’ve been having fun ever since.

I love Overwatch.  Everything from the bright color palette to the quirky cast of characters sets it apart from most other triple-A releases.  But that would mean nothing if it wasn’t fun.  The heroes allow for many different types of fun.  Maybe shooting people with Phara’s rockets is your jam.  Or you take personal pride in keeping your team alive as Mercy.  Overwatch is what we have come to expect from Blizzard, an existing idea that has been polished to near perfection.  Although Blizzard has introduced many improvements to the online FPS multiplayer genre: Overwatch doesn’t do anything revolutionary.  But it is really fun to play.

Overwatch is a love letter to classic FPS multiplayer.  Quake, Counter Strike and most obviously Team Fortress 2 are all inspirations for Overwatch’s gameplay.  Unlike Call of Duty Overwatch requires constant teamwork.  Knowing where your teammates are, what heroes they have chosen and how you can best benefit your team are imperative for victory.  Each of the four classes, and each of the 21 heroes spread across those classes, has a specific place in the team dynamic.  The most rewarding aspect of Overwatch is the interplay between the heroes.  Modern FPS multiplayer holds 1v1 match ups above everything else.  Every design choice ensures no one player has an advantage over any other.  A match of Call of Duty could be seen as six 1v1 matches.   Overwatch takes the exact opposite approach focusing on team v team.  This design philosophy allowed Blizzard to design heroes without worrying about 1v1 match ups.  Tracer won’t beat Roadhog 9 times out of 10 but distracting a Roadhog player still benefits the team.  This allows for a much wider variety in hero play styles.  Your success in Overwatch is not measured by KD ratio but rather how well you do the job your chosen hero was designed for.  The ability to change heroes during the game makes for very interesting tactical choices as each team has to react to the other’s hero choice 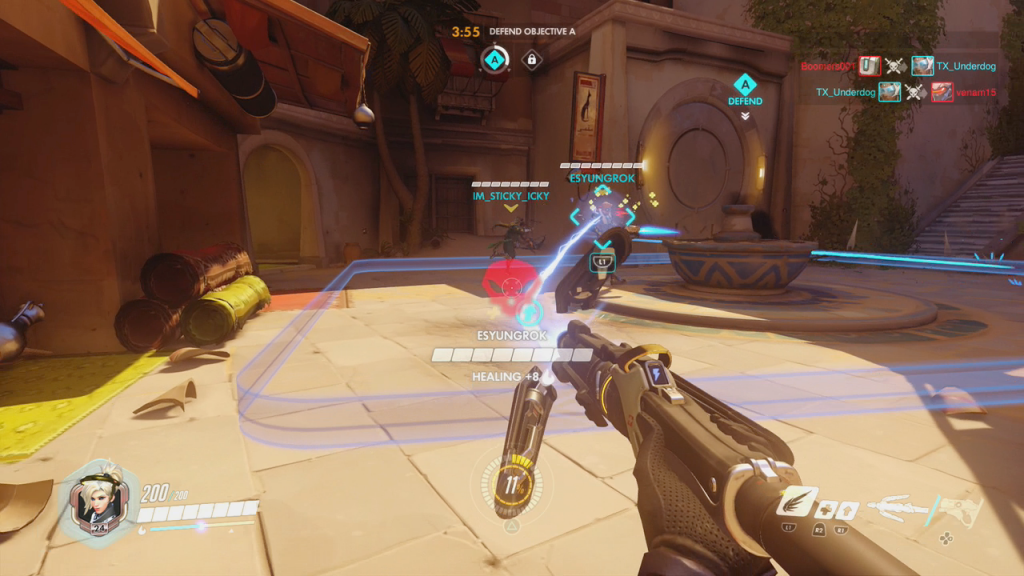 There is no loadout customization in Overwatch.  Each hero is equipped with one weapon, two abilities and an ultimate, although this exact ratio varies from hero to hero.  Learning the ins and outs of a hero and the interplay between abilities is half the fun in Overwatch.  There are only three gamemodes, attack/defense, payload and king of the hill.  Much like League of Legends, Overwatch’s gameplay variety comes from the heroes. The same gamemode can feel totally different depending on which hero you choose.  It nails the “simple to learn but hard to master” idea that so many games struggle to capture.

Blizzard has given each hero their own personality both in terms of gameplay and presentation.   The visual design of each hero is consistent with how they play.  Tracer is on the small side of the hero roster and wields two small pistols.  Her backstory says she was a test pilot for teleportation aircraft.  Everything we see from Tracer in the trailers, from her abilities to her upbeat personality, is reflected in game.  She plays fast and is great for flanking.  Her pistols don’t do much damage, small guns generally don’t, but they are used to distract and hinder the enemy team.  Even her audio voice lines are always cheerful and optimistic no matter the situation.  This synergy between visual design and gameplay may not seem important but it is.  Allowing a new player to get a feel for a hero from looking at them on the character select screen makes Overwatch very accessible and less intimidating for newcomers. 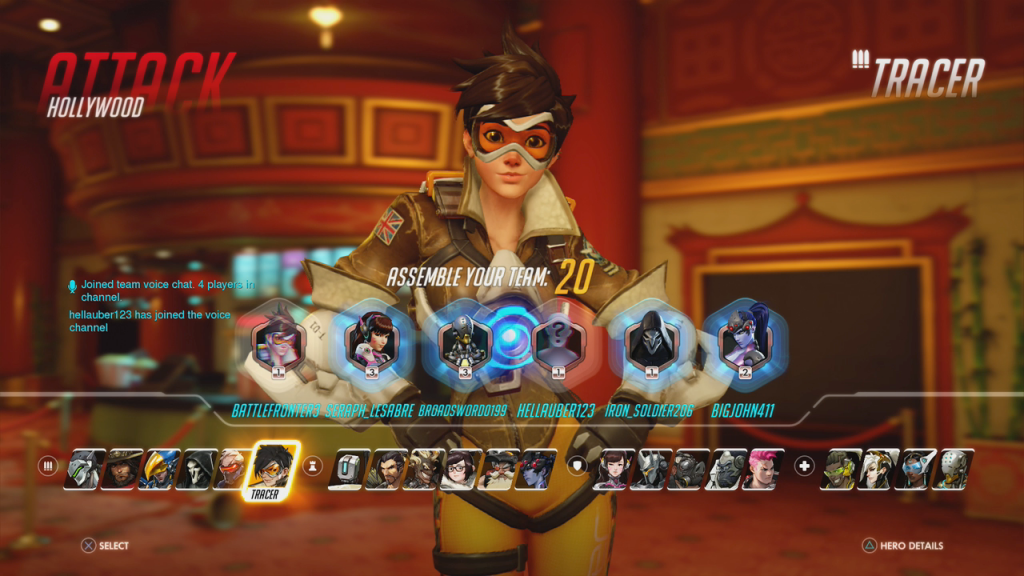 Overwatch is great and it is really popular right now, but the true test will be how long it can keep people playing.  Once the novelty of Overwatch wears off will it still be fun after the 900th match?  I think only time will tell.  Blizzard’s first test will be competitive mode which launches in about a month.  Having a rewarding competitive mode will do wonders for Overwatch’s long-term player interest.  Blizzard’s other silver bullet is their DLC plan.  All future maps and heroes will be free for all players.  Keeping the player base unfragmented is a bold, player-first move. 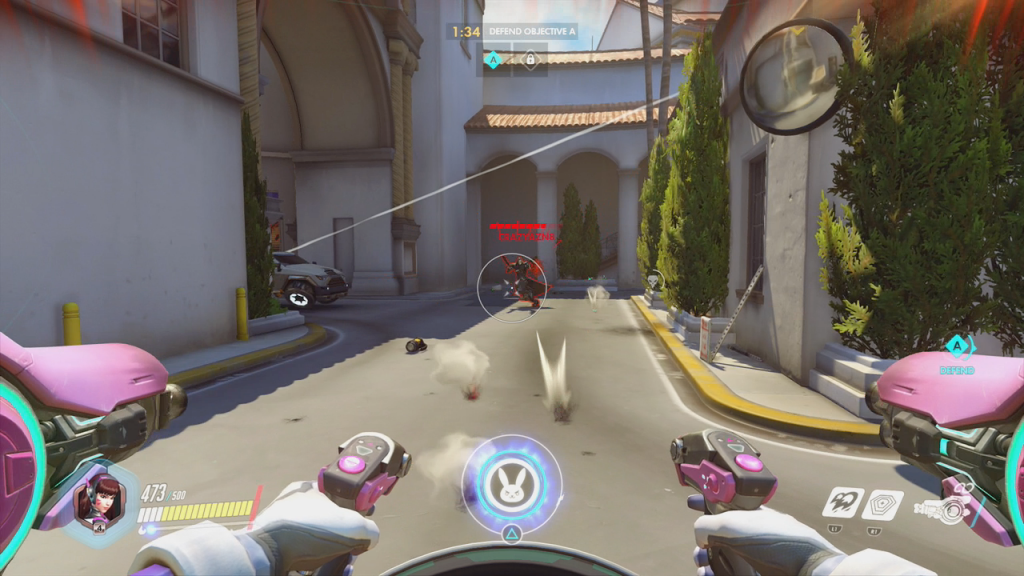 That being said, I do think there are some problems with Overwatch. The biggest is the price point.  On the gameplay side Overwatch is easily compared to Team Fortress 2 while their overall strategy is more in line with League of Legends.  With a big unfragmented player base and a huge e-sports push Overwatch is attempting to recreate the global phenomenon League has become.  There is one huge problem.  TF2 and League are free to play.  Overwatch is asking sixty dollars.  As much fun as Overwatch is I have a hard time condoning a sixty dollar price point for an online-only game.  In addition to sixty dollars Overwatch offers micro transactions in the form of loot crates.  Yes, it is all cosmetic stuff that doesn’t affect the gameplay but I don’t think that matters.  This is still a sixty dollar game locking some of its content behind luck-based microtransactions.  And yes, I know you can also earn loot crates by playing the game and use in-game currency to buy skins etc.  But the in game currency can only be earned through the loot crates themselves which defeats the purpose of it entirely.  You can’t grind for the currency to get that awesome Mercy skin because it is all up to chance.  Because of this the progression system is not rewarding at all.  I don’t feel like I am working toward anything besides a bigger number next to my player icon.  Blizzard could easily solve this by giving each player a tiny bit of currency after each match.  As much hate as Call of Duty gets their progression system works.  I always felt like I was working toward something.  However, in Overwatch I brace myself for disappointment every time I open a loot box.

Overall, the future looks bright for Overwatch.  If you want to relive classic FPS multiplayer days, or you want to try something new, Overwatch is one of the best multiplayer games to come out in years.