This summer the PSN is hosting their annual PLAY event.  Every year they hand pick four indie titles, usually from untried developers, and offer them with an incentive to pre order more than one.  This year developer Double Fine is up to bat first with Head Lander.

Headlander’s gameplay is the weakest part of an otherwise mediocre game.  The crux of the gameplay is ripping heads off of enemies, don’t worry they are robots,  and “headlanding” on their bodies.  Body switching is a cool idea but it doesn’t translate into engaging gameplay.   Once in control of a body Head Lander becomes a rather average side scrolling shooter.  I found no real strategy to combat.  Since the player can detach from a body when it becomes too damaged there is little to no risk in fire-fights.  Holding L2 allows the player to see the path their shot will take.  But I found the best strategy to be shoot like a madman.  Most of the robotic bodies are carbon-copies of each other, destroying most of the combat variety.   Head Lander gives the player a large upgrade tree with many different abilities.  But since dispatching enemies is already really easy I forgot to use most of them.  Head Lander’s combat has many good ideas that are too underdeveloped. 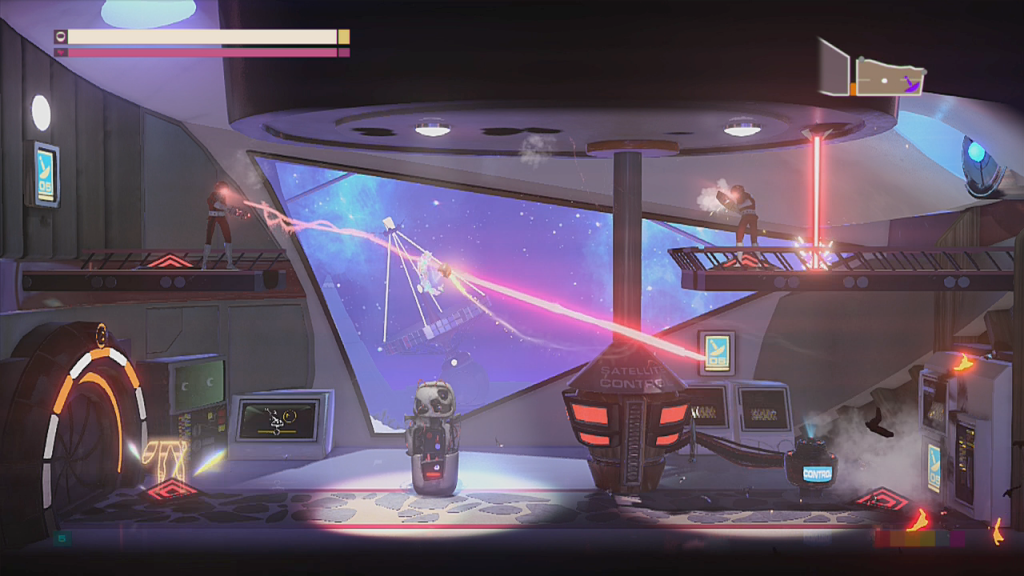 When I started Head Lander I thought it was a metroidvania with branching paths to explore.   But in fact the game is very linear.  The door unlocking system would seem to facilitate backtracking and branching paths, but like so many other things in Head Lander it is criminally underused   Every door is assigned a color: red, orange, yellow, green, blue and purple.  A colored door can only be traversed with a body of the same color.  These colors are also used as a sort of hierarchy.  A yellow body is not only more powerful than a red body but it can also open yellow, orange and red doors.  This is a cool idea but once again Head Lander fails to do anything interesting with it.  Making high ranking enemies more rare seems like a simple idea, but it could have added an entirely different spin to combat.  Forcing the player to be protective of high ranking bodies would have added some much needed risk.  Instead areas with green doors are patrolled by green enemies and so on.  Head Lander doesn’t encourage the player to explore.  Finding collectables and upgrades should make the player feel smart without being frustrating.  Instead Head Lander’s upgrades are stowed away in areas whose entrances are clearly marked on the map.  Play any classic platformer and the game will routinely show the player a collectable but not how to acquire it.  These act as puzzles that don’t block progression but instead offer little ah ha moments throughout the game. Whenever I saw one of Head Lander’s secret entrances there was no mystery.  I never did anything remotely challenging to be rewarded by an upgrade.  I simply flew through the door and grabbed the collectable, no puzzle, no challenge and no fun. 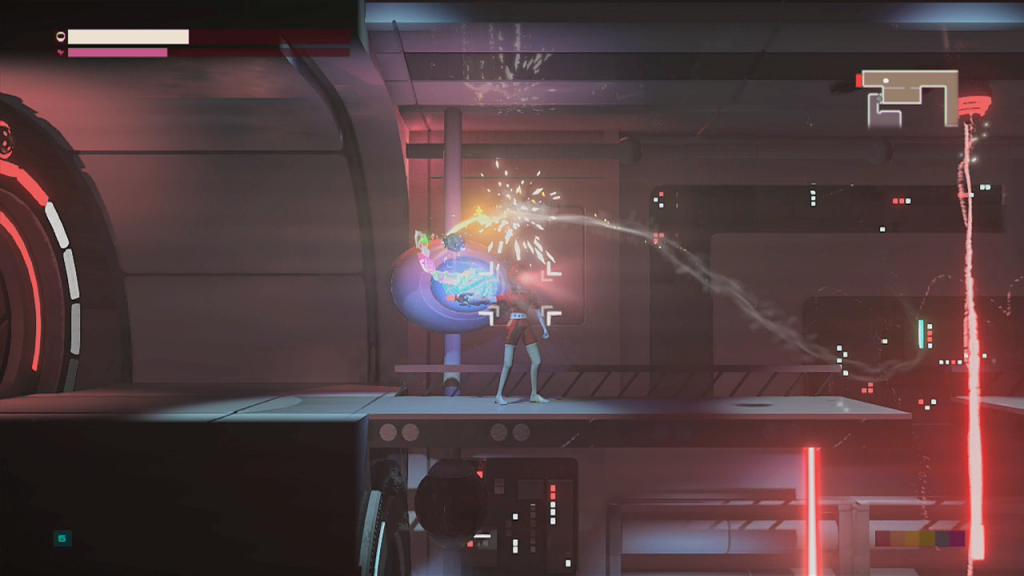 Being a Double Fine game one can expect Head Lander to be genuinely charming.  The art direction is spot on.  I love games that use color and as mentioned previously the primary colors are baked into the gameplay itself.  This plays out on a retro futuristic almost Blade Runner esque background.  Unfortunately the personality of this world leaves much to be desired.  The writing, usually a notable highlight in Double Fine games, has no energy.  The voice that guides the player through most of the game falls flat.  Most of the dialogue feels like a joke with no punchline.  The only humor I found in the game are the doors.  Non security doors will say “This door opens for anyone . . . even you.”  and most of the other doors have some pun that corresponds with their color, “Orange you glad I opened for you?”.  Since this is the only humor in the game they seem almost out of place.  Beyond that it feels at odds with the rest of the game which tries to tell a pretty serious Sci-Fi story.

Head Lander disappointed me.  Nothing stands out as a reason to play this game.  It was competent enough for me to finish, but all the way through I was only mildly interested.  There are so many better games out there.  Head Lander is the pinnacle of the “it’s fine” game, and it doesn’t do anything that makes it worth your time.