Roguelike has been a favorite industry buzzword for the last few years now.  Especially in the indie scene the roguelike sub genre is thriving.  But few people remember Rogue, a game for which the industry owes a great deal.  Created in 1980 by Michael Toy and Glenn Wichman, Rogue used simple ASCII graphics and singlehandedly created an entire genre.  Brut@l is a reimagining of Rogue for the modern era, ASCII graphics and everything.

Brut@l gives the player a simple goal.  Fight your way to the 26th level of the dungeon and kill the dragon.  The trick is getting there.  Brut@l is a roguelike at its purest form, procedurally generated dungeons and permadeath are constant companions.  Unlike many modern roguelikes, nothing carries over from game to game.  When you die that is it, you lose everything.  The problem with modern roguelikes, such as Rogue Legacy, is in the incorporation of items and experience that carry over, death quickly loses its significance.  Despite its death mechanic, Brut@l is forgiving, and it streamlines the roguelike formula into an action RPG. 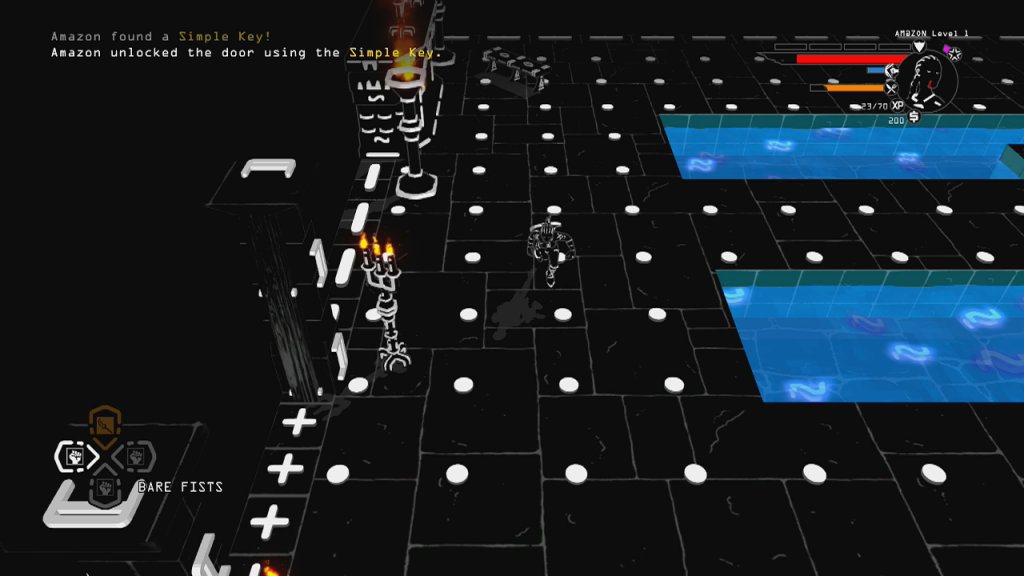 I’ve dabbled in classic roguelikes before always to much frustration.  I respect the games but I’ve always found them too obtuse and unforgiving.  Brut@l is not as hard as I was expecting given its heritage, and I think this is a good thing.  I was expecting to be clobbered quickly on my first game but Brut@l is quite easy in the early levels.  Giving the player some breathing room early on works to draw new players in.  Buttons for attack, block, dodge and special move make for a easy to understand combat system.  As much as at first it feels like Dark Souls, don’t expect the same level of difficulty and depth.  There is a problem in the late game with some weapons breaking combat.  But the strategy doesn’t come so much from the combat, instead most of your time is spent on exploration and health management.  I found that even though I could tear through a room full of enemies I would still take a fair amount of damage.  Because of this health restoring items are at a premium.  The gateway to the lower levels of the dungeon comes from knowing how to engage enemies and when to heal.  Exploration is key.  The player could easily sprint through the dungeon until they found the entrance to the next level, missing all of the critical items in the process.  Brut@l keeps the feeling of classic roguelikes without sacrificing accessibility. 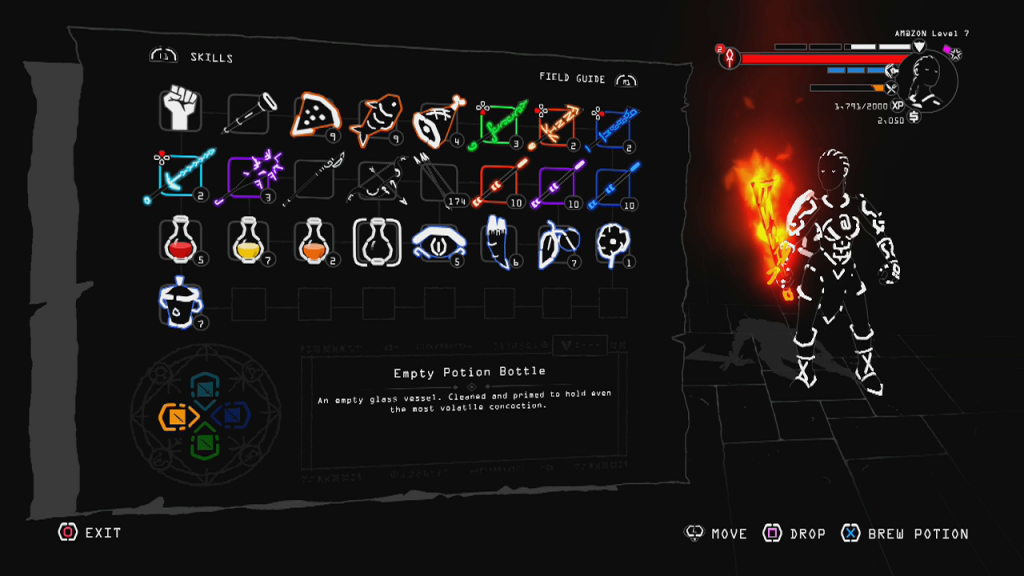 Brut@l lets the player choose between four different classes.  The one unfortunate thing is the classes are only differentiated by their starting skills.  But since every class has the same skill tree, they all play pretty much the same.  This isn’t a problem in singleplayer but Brut@l can support up to three additional co-op players, so some class variety would have been helpful.  What keeps the gameplay from being stale are the weapons.  Brut@l has a simple but diverse lineup of weapons and together with elemental enchanting you can quickly find your own playstyle.  The one weapon the breaks the game is the longsword.  During my playthrough I quickly learned the longsword special attack renders the player invulnerable for the duration.  This spinning attack move made me unstoppable.  Until I fell down a hole.  My one glaring issue with Brut@l are the unnecessary platforming sections.  Only once was my playthrough ended because an enemy actually killed me.  Roguelikes should always make your death seem like your fault.  But falling down an endless pit because of a miscalculated jump always feels like a cheap death.  Brut@l is above all simple and, despite a few gameplay stumbles, I had some good fun dungeon crawling.

Brut@l’s graphics are the one truly unique thing about the game.  Seeing ASCII graphics fully realised in 3D is something I have never seen before.  For the most part it works.  Sometimes items can be lost in the clutter but the 3D ASCII are simple and get the job done.  Bringing up the map gives the player a bird’s eye view that is designed to look exactly like classic ASCII games, in a clever homage to Brut@l’s heritage.  Graphically I wouldn’t call Brut@l pretty but it is certainly unique.