Broforce is simple, jump, shoot and blow crap up.  An action platformer in the pixelated style studio Devolveer has become known for Broforce takes joy in the simple act of shooting bad guys and blowing stuff up.  Each character the player is given access to is a parody of a famous action movie hero but with 100% more broification. From Bro Hard (die hard) to Brominator (terminator) most well known action movie heroes are represented in some way.  Broforce’s character variety is it’s greatest strength.  Hidden throughout each level are prisoners, rescuing one immediately changes the player into another action movie hero.  One minute you are the terminator with a heavy machine gun the next you are indiana jones dispatching bad guys with his trusty whip.  Each level offers the player a variety of different approaches.  You wouldn’t guess it but it is possible to stealth your way through a Broforce level.  Every inch of the level is destructible allowing the player to dig tunnels under the bad guys and attack from behind.  But in all seriousness, guns blazing is the best approach.  With the obligatory explosive red barrels it is possible to set off spectacular chain reactions which leave only blood and guts where there used to be bad guys. 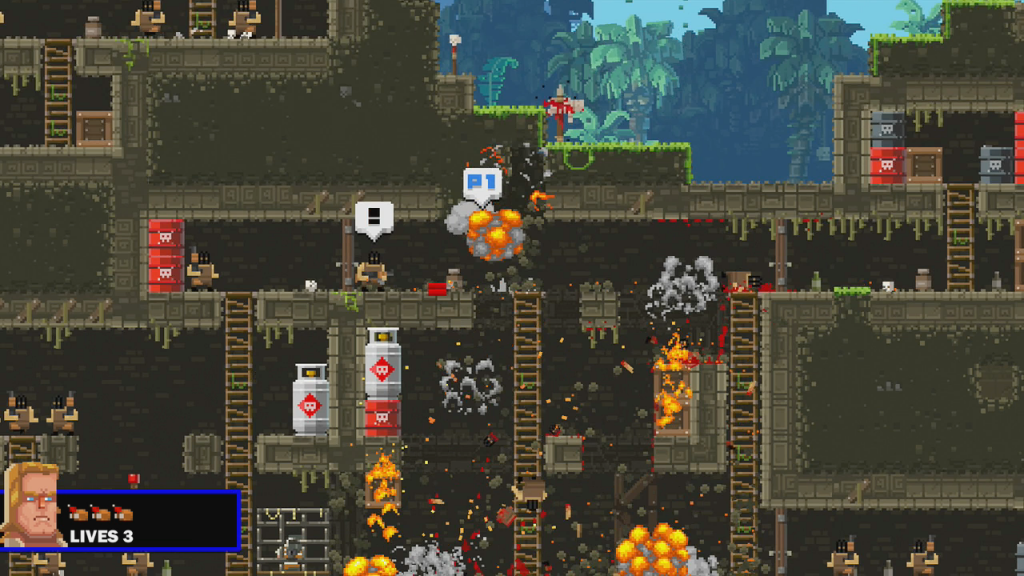 Broforce isn’t without its faults, cheap deaths are a constant nuisance as your character dies in one hit.  I died many times not even knowing my character was in danger or I accidently shot a red barrel I was next to.  Despite being a game about running in guns blazing Broforce can require more finesse than the controls are cut out for.  Throwing the grenade in the right place or platforming your way over a minefield is more frustrating than it should be but it never breaks the game.  Broforce remembers that dumb fun is sometimes the best fun and it doesn’t pretend to be anything more than that.  Despite its flaws, after fifteen minutes Broforce kept me playing and it is definitely worth a try.