Developer Housemarque has always nailed one thing, moment to moment gameplay.  Alienation captures the feeling of their previous titles like Resogun and Super Stardust but stumbles when it attempts to merge with a loot driven RPG.

You’ll feel right at home in Alienation if you have played any of Housemarque previous titles.  It’s a twin stick shooter although more in line with Dead Nation than Super Star Dust.  There is nothing wrong with Alienation’s gameplay, each of the three classes plays well and is unique enough to keep things interesting.  Being a spiritual successor to Dead Nation most of Alienation’s gameplay revolves around managing ammo and knowing what weapons to use when.  Alienation adds to this formula with abilities.  Each class has four and they do everything from leaving a trail of poison gas to calling down airstrikes.  Unlike regular RPG mechanics these abilities aren’t on a timed cooldown.  These skills are recharged with orbs dropped by enemies, this forces the player to constantly engage the enemy and not hang back waiting for their abilities to recharge.  Combat is fluid and responsive, all of the weapons are satisfying to use and the Aliens you are shooting them with are fun to kill.  One of Alienation’s greatest strengths is the enemy design.  Far from being cannon fodder many different enemy types demand a change in strategy.  The game can throw huge amount of enemies at you and it is easy to feel overwhelmed.  I do get the sense that Alienation is designed primarily for multiplayer.  Up to 3 friends can join your game in drop-in drop-out co-op.  I don’t prefer to play these type of games that way but the little I did play was fun and the difficulty goes down considerably.  If you have some friends to play with online then I would recommend that.  It’s too bad a game that plays this well is bogged down by the other half of its systems. 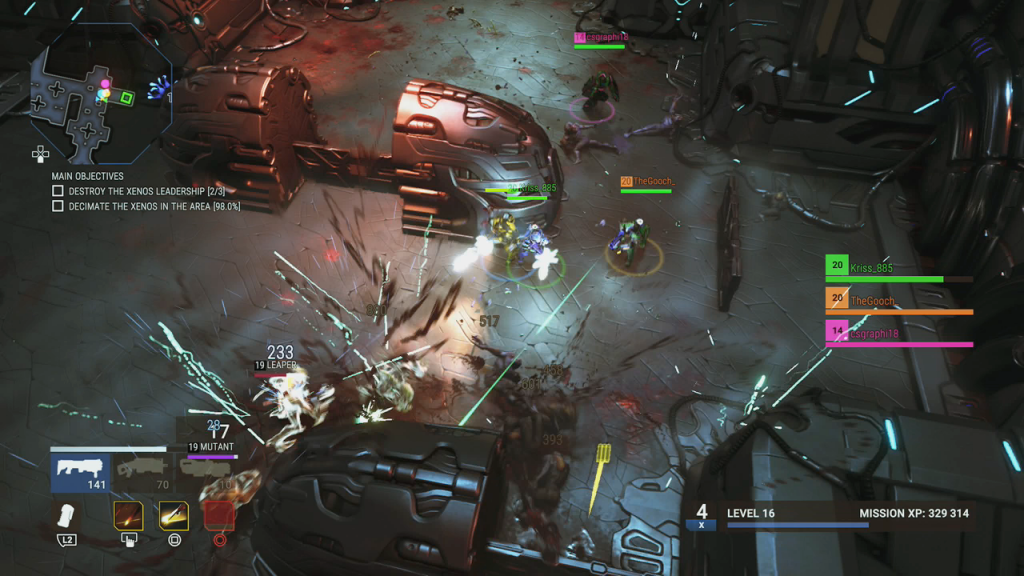 I was puzzled by the lack of a score or any type of leaderboards for that matter.  So much of the enjoyment and replayability in Housemarque games come from chasing highscores.  I am quite proud of my Resogun highscore and I feel the urge to try and beat it to this day.  It started making sense the deeper I played Alienation.  Far from being a compliment to Housemarque’s classic gameplay loop, the loot driven RPG mechanics aim to replace the highscore.

Alienation chases the king of the genre Diablo 3.  I don’t dislike these types of games, I’ve put well over 100 hours into Diablo 3 myself.  But Alienation doesn’t do enough to stand out.  I blasted through the initial campaign in about five hours.  Those five hours were very enjoyable and felt comparable to a classic Housemarque game.  But suddenly the end game grind came out of nowhere and the pacing slowed to a crawl.  Once you finish the campaign it immediately starts again on a harder difficulty.  The only reason to play the missions again is to find keys to unlock the true endgame content, UFO missions.  These are Alienation’s version of procedurally generated dungeons.  They are also very difficult.  If you can complete it without dying you get another key that unlocks a higher level endgame dungeon.  If this endgame loop sounds familiar to you it’s because it is nearly identical to Diablo 3.  The problem is none of this endgame content is particularly user friendly.  First you need to play a story mission again to find the correct side mission.  These mini-dungeons are where you find the UFO keys.  But if you die in these you lose your chance and are kicked back to the story mission.  If you manage to get a key the same rule applies in the UFO dungeon, die and  you lose your chance for the higher level key.  Dying in a UFO feels like a waste knowing you must go play another story mission and find a key to get another shot.  A far cry from the “just one more try” feeling Resogun and the like imbued in me. 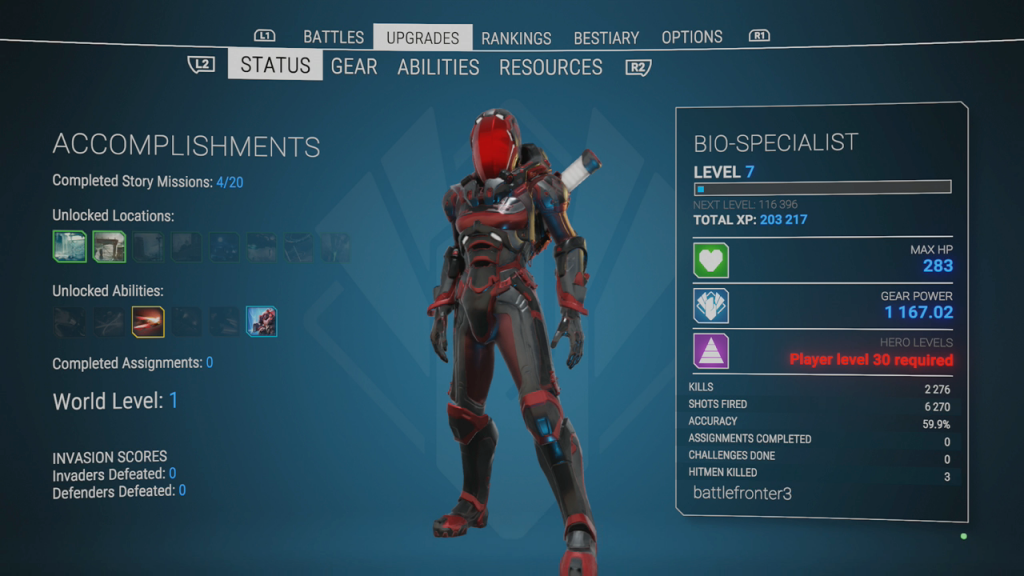 After about ten hours I don’t have any plans on returning to Alienation.  I enjoyed those ten hours but I am disappointed at the lack of reasons to return.  I am hoping Housemarque will change that with post launch support but right now I can only recommend it as a fun but fleeting distraction.