Never have my first impressions of a game been so spot on.  From the moment I saw a trailer for Abzu I thought it looked like Thatgamecompany’s Journey, just underwater.  Abzu doesn’t shy away from this, proudly stating “from the creative mind behind Journey and Flower”.  Far from turning me off I was all the more intrigued by Abzu.  So far no developer has really tried to challenge Journey and I was interested to see a different take on the Journey idea.  But unfortunately Abzu is a misguided attempt to recreate Journey’s magic, although it has a few fresh ideas of its own.

My jaw hit the floor when I played Abzu.  Not because the game was awesome, but because it is exactly like Journey.  I was expecting a similar experience to Thatgamecompany’s masterpiece but I wasn’t quite prepared for what I played.  Anyone who has played Journey will immediately recognize most of Abzu.  I want to be clear, Abzu doesn’t just look and feel like Journey, it is almost indistinguishable at times.  Both Journey and Abzu have characters that communicate the same way, both characters seem to be the last of their race, the player finds murals that tell history in both games, the story beats are nearly identical and even minor gameplay elements are much too similar to be a coincidence.  It is difficult to say much more about Abzu when it seems to be a clone of another game.  Abzu is is a pretty game but it doesn’t do anything new or interesting with its beauty.  I am at the same time disappointed that Abzu does almost nothing new and impressed it copies Journey so well. 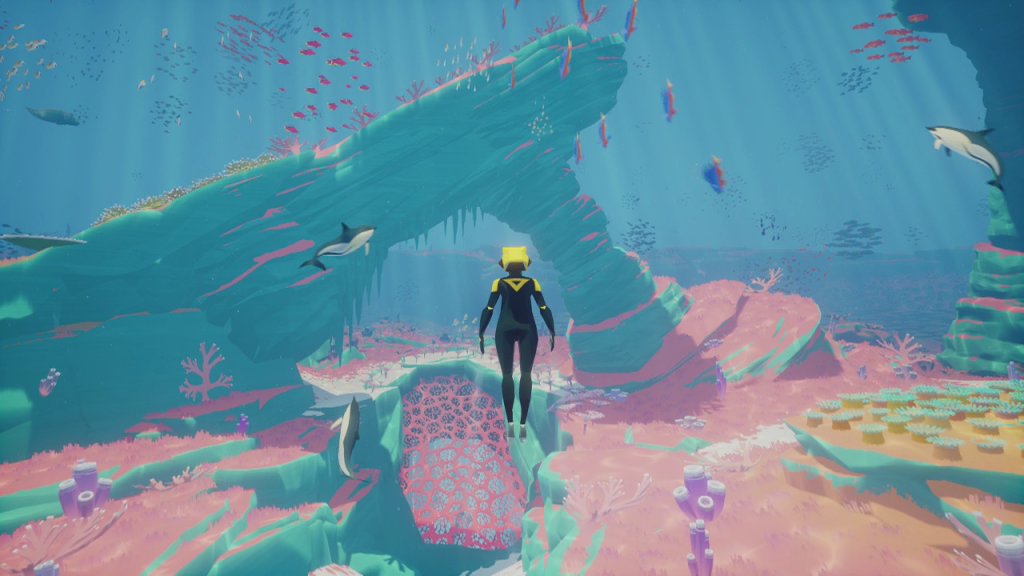 The one reason to play Abzu is the fish.  Giant Squid studios clearly spent a long time researching all the different kinds of sea life.  Abzu acts as a virtual fish tank the player can swim through.  As you descend through the ocean the sea life changes accordingly.  The best parts of Abzu are the moments when the game focuses on the marine life.  Unfortunately these moments are few and far between.  The game allows the player to interact with the fish but there is no reason to.  For a game about the ocean it is disappointing to see the inhabitants relegated to little more than a backdrop.  In every level there are statues the player can activate.  This unlocks the camera and allows the player to freely observe the different sea life.  It is disappointing that the only part of the game that focuses on the interesting animals is passive.  Abzu should have built its gameplay around the animals.  I would have liked to see Abzu take advantage of the beautifully detailed marine life.   But as it is now they are simply used as decoration.

I’m not one to condemn a short game.  I think the value of the experience matters more than the length.  However, I do think it is relevant to say Abzu is short, lasting only around two hours.  So the question becomes is the quality of the experience worth the price of entry?  The short answer is no.  Abzu is a clone of Journey and a good clone at that.  But Journey is better in every way and asks five dollars less for the experience.  If you have already played Journey there are not enough reasons to play Abzu.  There is potential here, but it is never realized and Abzu isn’t worth your time.